During the February 19th Senate Sitting, Senator David Wells of Newfoundland and Labrador paid tribute to the late Marie Warder and her accomplishments in raising awareness of hereditary hemochromatosis in Canada. He spoke of the avoidable complications caused by unrecognized iron overload, and the work of the Canadian Hemochromatosis Society to bring awareness to the condition and support to individuals and families affected. Senator Wells himself has hereditary  hemochromatosis. The following is a portion of Senator Wells’ statement:

Honourable senators, I rise today to pay tribute to Marie Warder and to bring awareness to a common genetic disorder that remains relatively unknown: hemochromatosis. It is a genetic disorder where there is excessive and potentially toxic accumulation of dietary iron in the body. This iron overload can be fatal. I know this all too well because I, too, suffer from this condition.

Hemochromatosis is Canada’s most common genetic disorder. Those with hemochromatosis are genetically unable to metabolize iron absorbed from their diet. Men and women are equally affected. Harmful iron overload occurs in joints, the liver, pancreas, heart, brain and endocrine glands. Left unrecognized and undiagnosed, the consequences of too much iron can be prolonged, severe and fatal.

One in 300 Canadians has the condition. One hundred and twenty-five thousand people in Canada have the genetic potential to suffer severe organ damage due to iron overload. It’s believed that only 20 per cent of those with hemochromatosis know they have it.

Hemochromatosis cannot be cured, however, early testing, diagnosis and treatment for the disorder can reduce or eliminate most of the severe complications, which include arthritis, diabetes, heart failure, cirrhosis of the liver and cancer. Diagnosis is made through blood tests and genetic testing. Treatment is simple: frequent and regular removal of blood. This blood is suitable for donation.

Hemochromatosis is most prevalent in Canadians of European and Celtic descent. The incidence in Newfoundland and Labrador is significantly higher than the national average, and there are instances where an entire family has the condition. Those affected in rural and remote regions must travel hundreds of kilometres to receive treatment.

The burden of undiagnosed hemochromatosis in Canada results in avoidable costs to the health care system of premature chronic diseases, the financial loss to families due to disability and the preventable loss of loved ones.

The Canadian Hemochromatosis Society strives to create awareness of hemochromatosis and provide support for those affected. The society has helped many Canadians avoid the progressive suffering, disability and premature death from chronic diseases prompted by hemochromatosis. A small dedicated staff, a national board of volunteers, regional volunteer chapters and a medical advisory board champion the work that Marie started 35 years ago.

Colleagues, awareness is the cure to hemochromatosis. As Marie so accurately stated, “Find us one victim, and we will save a whole family.” 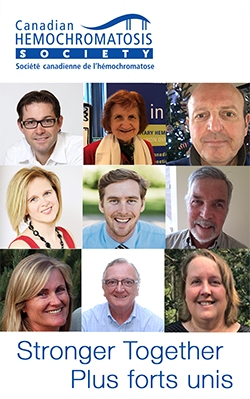 Awareness of hemochromatosis is strengthened when you add your voice to ours. Nous sommes plus forts unis.

Congrats to new board members elected @ our AGM. Thx to retiring directors, Jon Singh & Helen Fu, for your valued service! Special thx Paul Johnston for your strategic leadership as Prez the past 2 yrs, & congrats to new Prez Kate Carkner! See our Board: http://ow.ly/iW8f50GoLOL

Don’t miss your opportunity to attend this free online lecture with Dr Paul Adams, as he discusses results from his latest research. Register at: https://www.toomuchiron.ca/event/do-hemochromatosis-patients-treated-phlebotomy-have-risks-serious-symptoms/